What Do You Meme? Aussie Edition (Do not sell on online marketplaces) 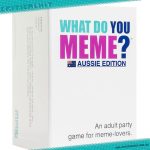 What Do You Meme? Aussie Edition (Do not sell on online marketplaces)

The Party card game for friends for the social media generation!
The Aussie edition includes Australian language, slang and references for a true-blue edition!

Think you’ve got what it takes to out-meme your friends IRL? Compete to create the funniest meme by pairing Caption Cards with the Photo Card in play.

The rules are simple. Each round, a rotating judge plays a Photo Card and everyone else plays a Caption Card to complete the meme. The judge decides the funniest pairing, and whoever played the winning Caption Card wins the round. Lather, rinse, repeat.

How was the new Aussie Edition developed?

All 360 cards of the original edition were examined by Australian comedians and one of three decisions were made on each card:

1. Replace completely. The joke didn’t make sense in Australia (30)
2. Revise with Australian language/slang/reference (230)
3. Keep the card as is (100)
The numbers in ( ) are estimated #s for each category.

Be the first to review “What Do You Meme? Aussie Edition (Do not sell on online marketplaces)” Cancel reply