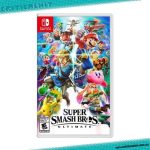 In the most ambitious game in the series, Super Smash Bros. Ultimate will include 66 fighters as well as re-worked and new fighting stages alongside new items, assist trophies and music! This truly is the biggest Super Smash Bros. game ever!