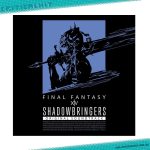 This Blu-ray album features both video and audio so you can enjoy familiar scenes from the game alongside your music. In addition to the music found in Shadowbringers, this album also picks up where we left off in our last soundtrack, STORMBLOOD: FINAL FANTASY XIV Original Soundtrack, and includes songs from Stormblood Patches 4.4 and 4.5! Jam out to the music from the Interdimensional Rift Omega: Alphascape raid series whenever you want!

Our Customer Service hours are between 10am-4pm, Mon-Fri. Pick-up orders are suspended. Dismiss