3 for $10
JPN Ex.
This product is an exclusive item originally intended for sale in Japan. Once sold out restocking may be difficult as some lines are single production runs. 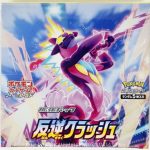 Certain products priced $4 are eligible for a 3 for 10 discount. Add 3 or more to drop the price to $3.33ea. You can mix and match products. To find others click the 3 for $10 link in the categories list.

Rebel Clash is the name given to the second main expansion of the Sword & Shield Series of the Pokémon Trading Card Game. In Japan, it was released as Rebellion Crash, the second expansion in the Pokémon Card Game Sword & Shield Era. It is based on Pokémon Sword and Shield, featuring Generation VIII Pokémon and the two game Legendary Pokémon Zacian and Zamazenta. The English expansion will be released on May 1, 2020, while the Japanese expansion will be released on March 6, 2020.

Starting with this expansion, Fairy-type Pokémon in the video games now appear as Psychic-type in the Pokémon Trading Card Game.