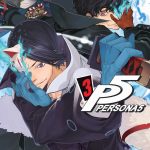 Based on the popular video game, this manga’s phantom thieves will steal your heart! After being arrested and having to transfer to a new high school in Tokyo, Akira Kurusu is given the goal of rehabilitation and awakened to a new power-the power of one’s true self, a Persona. Using his Persona and the mysterious navigation app Mementos, Akira and his friends take on the role of phantom thieves, saving people from the twisted desires of those around them. Ann has a new admirer…kind of. His name is Yusuke Kitagawa and he is an aspiring artist apprenticed to master painter Ichiryusai Madarame. Enthralled by Ann’s beauty, Yusuke is determined to use her as a model for a painting. But a new palace appears and it soon becomes apparent that it belongs to none other than Madarame himself, who has been plagiarizing his students’ art for his own gain. Will Yusuke have the will to rebel and join Akira and his friends to defeat the evil painter?!

Be the first to review “Persona 5, Vol. 3” Cancel reply