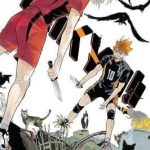 Shoyo Hinata is out to prove that in volleyball you don’t need to be tall to fly!

Ever since he saw the legendary player known as “the Little Giant” compete at the national volleyball finals, Shoyo Hinata has been aiming to be the best volleyball player ever! Who says you need to be tall to play volleyball when you can jump higher than anyone else?

Kenma Kozume has been trying to keep Kageyama and Hinata contained in a birdcage, but they break free with a bold four set! Now that Hinata has added height to his arsenal, Nekoma brings out their own rookie tandem of giants-Lev Haiba and Sou Inuoka-to stop him! The Dumpster Battle dives into the final, climactic set… Who will come out on top, Hinata or Kenma?!