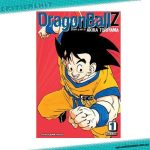 Five years have passed since the Tenka’ichi Budōkai (Strongest Under the Heavens) fighting tournament, where Son Goku emerged as Earth’s ultimate champion. Goku has since settled down with a wife and even has a son, Son Gohan. All seems peaceful, until one day when a mysterious visitor appears and reveals that Goku is actually an alien!

The visitor, Raditz, claims that Goku is a Saiyan Warrior, a member of the most powerful race in the universe. When the ruthless Raditz threatens to destroy Goku’s family and the entire human race, Goku races to stop him and finds an unlikely ally in Piccolo, his old archenemy…