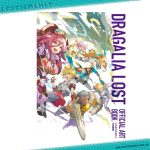 – Character: Character illustrations and flavor texts including the main characters of the story are posted!
– Dragon: The brave figure of the dragons who are connected by bonds with people along with the flavor text!
– Ryuki’s Amulet: Beautiful illustrations drawn on Ryuki’s amulet and stories about amulets are posted together!
– Illustration Gallery: A collection of official illustrations of “Dragalia Lost” published both inside and outside the game!
– In addition, some of the rough drawings drawn at the character and dragon design stage are released!