Attack on Titan: Before the Fall Vol. 6 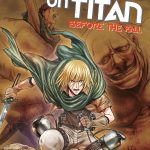 Attack on Titan: Before the Fall Vol. 6

<p><u><strong>ON THE SHOULDERS OF TITANS</strong></u><br></p><p>Fifteen years ago,
humanity led a last-ditch attempt to discover the Titans’ weakness – a
survey expedition to capture one of the beasts. But the ten-meter Titan
who appeared during the capture attempt threw the expedition into chaos.
Among those who scaped behind Wall Maria was the genius craftsman
Angel, a weapon developer who was participating in expedition as a researcher. What would he conjure up from this failure?<br></p><p><br></p>

Be the first to review “Attack on Titan: Before the Fall Vol. 6” Cancel reply